My trip from London to Perth ended a few days ago with a delayed touchdown at almost 11pm. The weather was gray and rainy when I landed, but it's now cleared up as we enter the first month of the southern hemisphere's springtime! The flights themselves were pretty comfortable - especially the first and longest leg with Norwegian Airlines - but the whole thing would have been much less tiring if I'd stopped for a day or two in Singapore, or maybe one of the cheaper Asian countries nearby. Lesson learned for next time.

Getting settled in such a faraway place has been made very easy by my hosts, who I first contacted on Couchsurfing.com just a few weeks before I left. The idea behind this site is to create connections between locals and travellers by letting people offer their sofa, spare bedroom or maybe even their entire home for visitors to use. In return, visitors are supposed to reciprocate, or at least help out with housework or anything else that will make the host's life easier. The most popular thing for WHV-ers to do on arrival is to spend a few weeks in a local hostel, which has its advantages, but staying with a host in their home is a great solution to some common problems.

Straight away you're in close contact with people who are happy to help you, and who know the area inside out. My hosts live in a quiet suburb of Perth called Forrestfield, and offered to pick me up from the airport even after a four hour delay in my arrival time. They've also driven me around the city, taken me to see some sights in the nearby parks and hills, and given me loads of advice on how things work. I had help setting up my local bank account, choosing a phone provider and sorting out all the other admin which would be a huge pain without a printer, free internet and a fixed address.

Also, the pressure of cost is basically non-existent. If I'd arrived and checked straight into a hostel, I'd be rushing to find work as soon as I could to stop myself eating into my savings. This is less of a big deal if you're doing some travelling first, but, having just got back from a four thousand mile roadtrip in the USA, I didn't want to spend all my cash being a tourist for another few months. In exchange for house-sitting, errand-running and dog-walking for my hosts, I'm able to live my first weeks at my own pace in a beautiful home which even comes with access to a car! It's a mutually beneficial deal which I feel really grateful to be a part of.

Aside from browsing job sites and sending out a few applications, I've set aside a couple of hours each day to check out the local sights. The best place I've seen so far is Lesmurdie Falls, where you can hike around a picturesque cascading waterfall enclosed by its own national park. There's a choice of routes which take you around the falls from above and below, and also let you explore miles of the surrounding hills on foot. The best part? The entrance is only about 3km from the house!

It's free to get in to the national park, and you also don't have to pay if you arrive by car. I went around midday on a Saturday, and was surprised how few people there were after my experience of similar places in the US. The trail to the foot of the waterfall was perhaps the easiest, as it only took fifteen minutes of slow walking before I emerged onto a rocky landscape and saw it flowing off the edge of a steep outcrop. From there, you can climb up a separate path to a couple of viewing platforms which let you watch the waterfall from above. You're rewarded with brilliant panoramas of the centre of Perth if you climb even higher.

With the weather only set to get better, and with plenty of other parks less than an hour from the city, I'm hoping to see more of the local nature depending on how long I stay with my fantastic Couchsurfing hosts. I also can't wait to meet some of the other people they've hosted, since a few are close to their end of their Australian Working Holidays and might be able to give me advice on jobs, fun places to go and opportunities I might not have thought of.
travel 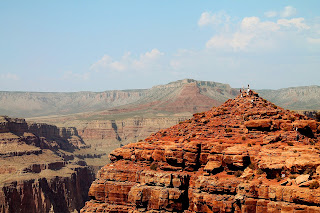