on August 05, 2018
Many pilots who learn to fly in the UK will eventually want to branch out beyond the confines of our small island. America in particular, being the birthplace of the aeroplane itself, was top of my list of places to do some flying once I finished my PPL in 2017. So, when the opportunity arose a year later to join family on a month-long roadtrip from Las Vegas, I didn't need much convincing to book a ticket and clear my schedule. Vegas is actually a popular starting point for many aerial tours which cover the Grand Canyon, the Hoover Dam and areas around Lake Mead. Having been a passenger myself on one of these tours a few years earlier, I was keen to rent a plane this time round and re-create the experience from the pilot's seat.

I found out pretty quickly that while you can't directly fly on a UK/EASA PPL in the US, the process to convert it to something usable is very simple. After filling in a few forms, waiting for a month or two and making a short visit to an FAA office when you arrive, you will be issued an American licence which mirrors the priviledges and validity of your original.

Broken down into smaller steps, the process looks like this:

Now you just have to wait while the two agencies talk to each other; assuming all was well, the FAA should send you a 'verification letter' telling you that they recognise your UK licence.

3. Organise an appointment at a FSDO (Flight Standards District Office) for when you arrive in the US. It's important to bring the above verification letter when you attend.
4. Arrange aircraft rental, allowing for a bit of ground instruction time and a flight review which will be required before going solo. Also think about what insurance you might need. 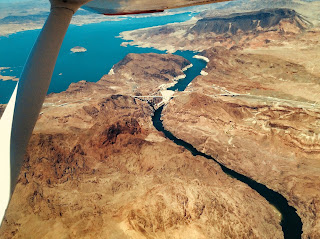 Most of this stuff was self-explanatory, and I found that people on both sides of the Atlantic were helpful and accommodating along the way. There are a few points worth noting though, just to make sure everything's covered before you actually make the trip out.


Sorting out the paperwork

The CAA's SRG1160 form is pretty unambiguous and I had it finished in about fifteen minutes. You just need to be prepared to pay a fee for them to process your paperwork, which came to £44 at the time I did it. Compared to the lengthy and expensive process of applying for your PPL originally, this should be quite an easy hoop to jump through - also, aside from the actual aircraft rental costs, this was the only time I needed to cough up any cash during the whole process.

The FAA's AC 8060-71 form asks for largely the same information, with an extra box for you to specify a FSDO which you'll visit when you arrive in the US. It's here that they'll check your documents and hopefully hand over your American licence. For me it made sense to pick the one in Las Vegas, which was just a few minutes' drive from McCarran Airport. You don't actually need to contact the FSDO at this early stage; just make sure you can definitely go to the one you choose. 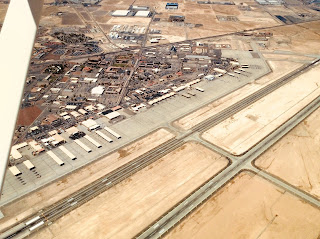 After I sent the forms, it was less than a month before the FAA e-mailed me back with my verification letter. The time taken probably varies with their workload, but it seems like they're fairly efficient - something which was nice to see as they didn't ask for any form of payment.


Booking and visiting the FSDO

After getting your verification letter, you need to make contact with your chosen FSDO to set up an appointment. I'm not sure how quickly these slots fill up, but I e-mailed the Las Vegas office about three months before travelling and I was able to have my pick of times. The schedules were quite obscure, with nothing on Mondays, Fridays or Weekends. Tuesdays to Thursdays I could choose from a three-hour block of times in the morning, or a similar block in the afternoon. I don't know if other FSDOs are the same but it's worth hashing this out early on, just to make sure you won't be stranded for days on arrival while you wait for the appointment times to come around.

Once my appointment was confirmed, the FSDO asked me to create an IACRA account and enter details of my application into their website. This involved answering some fairly standard questions about personal background, licence type and ratings. There was also a daunting 'Aeronautical Experience Grid' which demanded a breakdown of all my flying hours into specific categories. In hindsight, I don't think it's worth agonising about every single logbook entry when you're filling this in; for me it was never cross-checked or even mentioned at any later stage. Also, if you need some time to think about any of it, you're not required to complete your IACRA application ages in advance; just make sure you finalise and submit it before showing up. 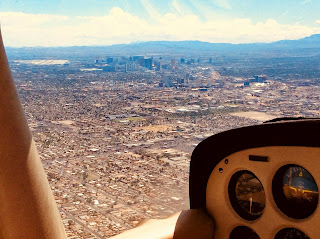 When I actually visited the FSDO, I was pleasantly surprised by the friendliness of the service. All I had to do was give my details and verification letter to the receptionist, then take a seat and wait a few minutes for an inspector to come round and meet me. He looked through my license, medical and ID, checked that everything was correct with my IACRA application and got me to sign a few standard forms before going round the back and printing my 'Temporary Airmen Certificate'. This simple piece of paper would let me fly immediately, and acts as a stand-in until the full FAA licence is delivered to your home address - again, all for free!

Another big benefit of using Las Vegas as a hub was the rich choice of flight schools offering planes to rent. It doesn't look like there's much at McCarran, which makes sense given that it's one of the busiest airports in the country, but there are a lot of GA operators at Henderson Executive (KHND) or North Las Vegas (KVGT). The company I chose, West Air Aviation, were located at the latter with a fleet of Cessna 172s and a couple more advanced aircraft. 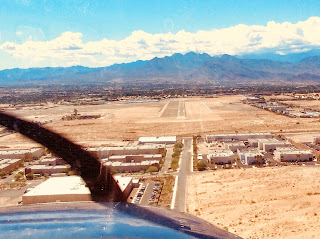 One more thing to think about before flying is renters insurance - something that normally comes as part of the package in the UK, but which needs some extra thought over in the States. It seems like it's normal for individuals to set up annual policies to cover themselves for things like aircraft damage, hull loss, personal injury, etc... in a similar way to car insurance. One of the reasons I chose West Air was that they allowed you to fly without the need for your own insurance after paying a one-off $100 waiver fee, which covers you on their fleet for a year. This struck me as the best option, since I didn't much fancy negotiating with foreign companies to try and pick a policy when I had little idea of what I really needed.

There was one common thing between all the rental companies I contacted - the need for a 'Biennial Flight Review', or BFR, before being allowed to fly as PIC. This makes perfect sense as I wouldn't expect anyone to rent an aircraft to a foreigner without a little bit of instruction time first, and it was also a great chance to learn about some of the differences between the UK and US in terms of radio, altimeter, airspace and navigation. My BFR with West Air consisted of an hour's Q&A time on the ground, followed by the walk-around. After this, we took to the sky and headed north-west of the city to an open area of desert used commonly for training. Here we did some standard airwork (steep turns, stalling, slow flight) plus some forced landing practice. Then it was back to the airport for three circuits, after which we taxied home and I was given the all-clear to take the plane for the afternoon.

Being given the go-ahead to take to the open skies of America was a fantastic feeling, and I know that the couple of hours' flying I did on this trip have improved my confidence as a pilot. Even better, provided I keep my EASA PPL current, I should be able to contact a flight school and hop in a plane any time I return - no extra effort needed. 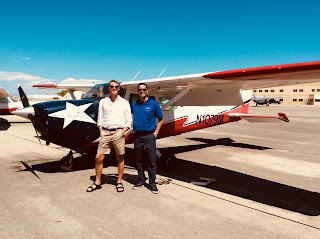 Here's hoping that this was the first of many aviation experiences that will shape my flying career as I travel round the world, and I hope I get the chance to appreciate other countries from the unique vantage point that only a light aircraft can offer.
flying travel

My trip from London to Perth ended a few days ago with a delayed touchdown at almost 11pm. The weather was gray and rainy when I landed, but it's now cleared up as we enter the first month of the southern hemisphere's springtime! The flights themselves were pretty comfortable - especially the first and longest leg with Norwegian Airlines - but the whole thing would have been much less tiring if I'd stopped for a day or two in Singapore, or maybe one of the cheaper Asian countries nearby. Lesson learned for next time. Getting settled in such a faraway place has been made very easy by my hosts, who I first contacted on Couchsurfing.com just a few weeks before I left. The idea behind this site is to create connections between locals and travellers by letting people offer their sofa, spare bedroom or maybe even their entire home for visitors to use. In return, visitors are supposed to reciprocate, or at least help out with housework or anything else that will make the host&